I have a print set that sends all the required documents to TaxFolder. One of those documents is the engagement letter. We try to send it ahead of time for signature. If it is signed in TaxFolder (and the icon changes in the print set) can we not somehow mark this document as “false” for printing?
TaxCycle knows it was signed, so logic would say we should be able to use a formula to turn this document on or off for printing to TaxFolder. This would give one more argument for the integration of TaxFolder and TaxCycle.

It you’re sending the Engagement letter before the rest of the documents requiring signature, I would suggest sending creating a separate print set that contains just that letter and then adding a condition to the print set to show or hide it based on the signature. I’m just trying to figure out whether it is possible to create a condition for that.

EngagementLetter=0 means it is signed. What is the code that it is not sig ned?

Should work as a relevant print set condition, like this:

You can also attach the print condition to the template itself 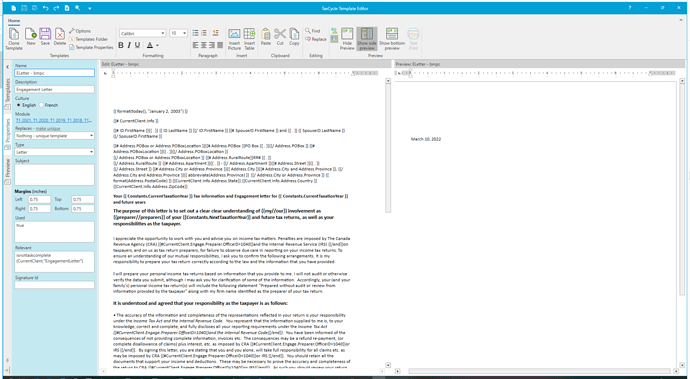 That is not a print condition, though. That is whether is it visible in the return at all. So if this is in place and the letter IS signed, then it would disappear from the sidebar and search. If that is what you want, it would work. I think I would want to see the letter even after it is signed.

That is a drawback, but that way you can accomplish to have it in a printset, and it not printing if it is already signed…