How to read a COR file?

When you use the T2 AFR, in addition to the data that imports directly into TaxCycle, you can get a .COR file from CRA containing data for the prior year. Doe anyone have software that can read/translate that file? I’m hoping that TaxCycle might eventually be able to import it (at least some of it), so that I don’t have to type in all the prior year comparative info for a new client. But, I’ll settle for a free tool that can read the .COR file and put it into a simple format from which I can copy/paste.

@Nezzer Our original intention when we added T2AFR was to download .cor and also recreate that T2 return. It’s on our list of To Dos.

When I am not certain of a file, especially from the CRA, I try making a copy, then attempt to open the file in Word as a Text file (Rename the extension from .COR to .TXT)

A good part of the time, if the file was just an XML file renamed, I can read the file and figure what the data is.

Awesome! That helps. So:

Where did you get the field descriptions/details? CRA? I couldn’t find anything when I searched their website.

@anr Each schedule starts off with the schedule #+GS1. You can ignore GS1.
Then, everything underneath until the next schedule # is of line # and value.

Field descriptions can be found on the CRA forms themselves and there is no collective document that lists all line #s with descriptions in all CRA forms.

I meant, how did you find out that the first 3 digits are the line number, and that GS1 means the start of a new schedule, etc.?

Here is a snip of one of my client files:

It seems the GS indicates something else for Schedule 8 - maybe page#?

@Nezzer
The screenshot is a sample of a test case I submitted to the CRA for the last TaxCycle release certification. The # that appears after GS indicates a multi form copy # or a row # in an expandable table. For example, S47 copy 1 is 047GS1, copy 2 is 047GS2.

Hope this answers your question.

Oh and I am in charge of TaxCycle T2 and that’s how I know these things.

Super! You might want to inform Marc Labrecque that importing the .COR file is on your ToDo list. When I submitted a Support Request about it, he replied to me saying:
“Hi Nelson. As far as I know there is no current plans to do anything with the .COR file that gets downloaded apart from accept it in the data packet CRA sends with a T2 AFR. I will let you know if I hear different but I would imagine reading the file to do anything useful with it would not be a trivial undertaking and there has been very little demand for that up until this point.”
Thanks again!

Notepad++ is also great if you are doing any php editing on web pages. It doesn’t automatically include that problem causing BOM (Byte Order Mark) UTF-8 signature that Notepad and some other text editors automatically encode into their files, often causing weird display issues.

@snoplowguy
I’ve been using Notepad++ for a while now, and it works well for reading .COR files.
But I had some trouble associating file extensions. I’ve tried both the 64 bit and 32 bit versions, and both have the same issue - you have to “Run as Administrator”, go to Settings–Preferences, and type “.COR” under “File Associations”.
And then, I’m not sure if this is related - Windows built-in “Notepad.exe” will no longer accept new file associations. If I create a new text file, and change the extension to, say “.ABC”, then right-click, and “Open With…”, choose Notepad and check the box to “Always use this app…” the setting is never saved. Next time I try to open a .ABC file, Windows again prompts me to chose an app. Similarly, if I open the Properties dialog, the “Opens with:” says, “Pick an application”. I can click [Change], select Notepad, but it never saves my choice.
Do other people who use Notepad++ have the same issue?

@Nezzer
I understand what you are saying, that you had to go into Notepad++ and set the file associations through the application before it will allow you to always open with that app as default. I’m not sure whether I had to do that or not. Sometimes it might depend on whether Notepad++ was actually installed on the computer (using the setup process) or whether the Notepad++.exe was just downloaded and running as a portable installation, which you can also do.

I also have an issue with Windows 10 not automatically or permanently associating unknown file types. For instance, I can associate .txt files with Notepad or Notapad++ and clicking the checkmark to “always open with” works. However, if I try that with an unknown extension, such as .abc then it seems Windows will offer to open the file with Notepad or Notepad++, but even if you put a checkmark in the “always open with” it does not remember the next time you try to open that file type. This is not contained to Notepad, it even happens if you try to open .abc files with any other app, for instance Firefox or Microsoft Edge. I don’t think this has anything to do with having Notepad++ on the computer.

I tried to force the file association using the Windows Command Prompt, and even though it appears to goes through the paces, it doesn’t work using the following command;

You guys and gals know that you can log onto CRA’s website, Select “View return status” under corporate tax click on “assessed” for the particular year you want and then you can see the return in detail. 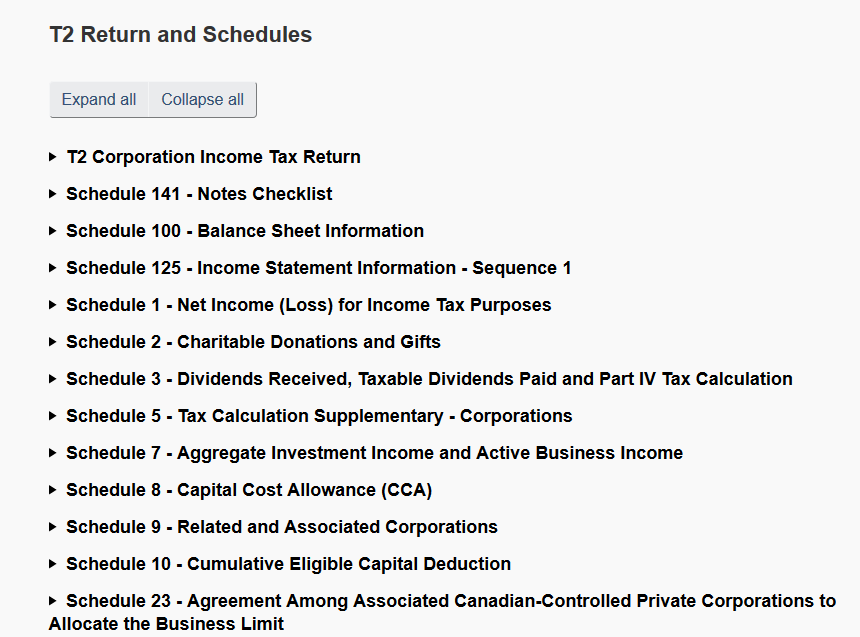 if you click on" Expand all" you can then print the entire return. You can even determine schedule 8 details from this output for new clients.

That being said, being able to recreate the return in Taxcycle would be nice, even better, roll over from the cor.

In the Tax Cycle live Q&A session today, this question was raised again - specifically the ability to import the .COR files into Tax Cycle T2. My original request was for prior year comparative info, but others may also want current year info or other data.

Tax Cycle’s Sarka Hojda suggested having a discussion about it here on ProTaxCommunity. Are any other users interested in this?

It would be helpful to take the download from CRA and import if for opening balances when taking over a new client.

I would certainly agree with this.

I just wanted to chime in and say that this is on our list of things to do. What has been mentioned on this thread is all incredibly valid.

What I am hearing is that you would like to be able to:

Likely, we will start with re-creating a T2 return first but I will have to have a chat with the team. The challenge I see is that what we are downloading is the content of .cor file which basically is the data that is sent to the CRA (any amounts with numeric line numbers on the form) when a T2 return is electronically filed. All this means is that the data we get is quite limited.

For example, non-capital loss carryforward amount available in a .cor file is a lump sum amount, not year by year. So, all that means is that when a previous T2 return is created from downloaded .cor, the return may not have all the relevant details and would have many overrides in it. But, I believe that there is definitely a huge value. We just need to give this some food for thought.

This is not going to happen this season (but if it is I will let you know) but it is on our radar.
As always, thank you for your support and patience.

Thank you and your team for always listening to your users

To be clear, I don’t want to recreate a T2. Particularly if I have already prepared and filed that T2 in the prior year. But, these .COR files are obtained at the point in time when we are creating a T2 for the CURRENT year - via the T2 AFR. So, at that point, we have a .COR file for the prior year.

In the case where this is a new client, recreating the prior year T2 would be fine, but I would use it only to carry forward the prior year data into the current year T2.

In most cases, I just want to be able to import the prior year comparative numbers into the current year T2 - that is, on the S1, S100, S125, and 5-year summary. Typically, this would overwrite the prior year values, but the new values should be the same as the overwritten values…so long as CRA assessed the prior year return the same as we filed it. As such, this may make it easier to review the prior year assessment (comparing it to what we filed last year), which is standard practice in many firms, including mine.